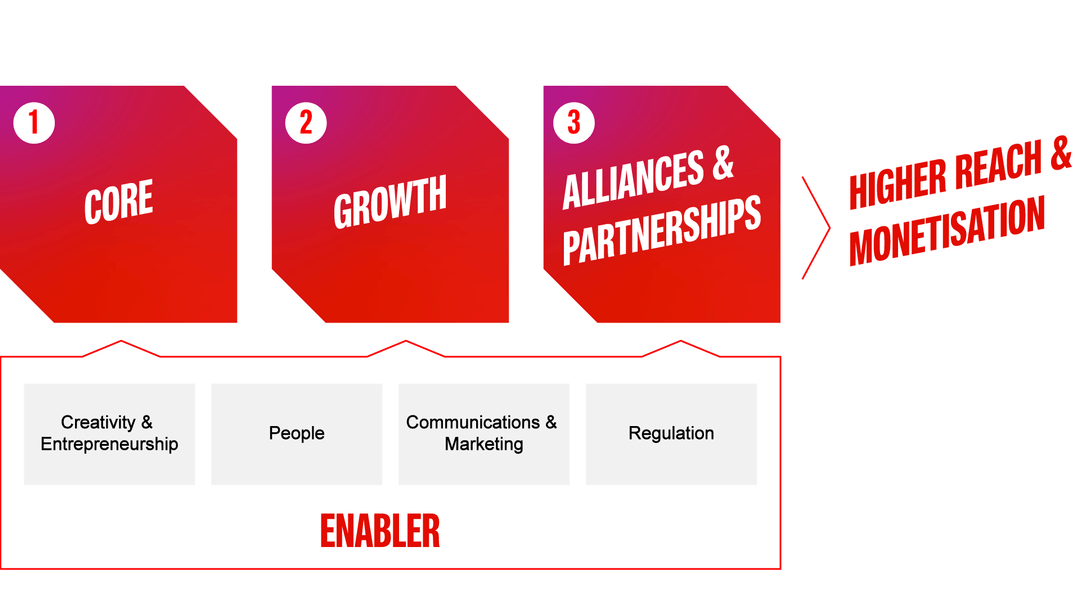 The international TV industry is in the midst of a major transformation, with huge opportunities for those who are prepared to shape the future.

To successfully transform RTL Group’s business, two factors are particularly important. One is higher reach – in both linear and non-linear – which requires investments in content, marketing and a state-of-the-art streaming platform. The second is better monetisation of audience reach – via targeting and personalisation/recommendation – which requires investments in advertising technology and data.

RTL Group’s Board of Directors, Executive Committee and Group Management Committee (GMC) defined a strategy that builds upon three priorities:

Building and extending families of TV channels has been key to address increasing audience fragmentation and competition in a digital, multi-channel world. In recent years, RTL Group’s families of channels have been enhanced by the addition of digital channels with clearly defined profiles, including Nitro, RTL Plus, Vox Up, 6ter, and RTL Z.

RTL Group’s primary focus is on organic growth. However, wherever attractive opportunities arise, the Group aims to consolidate across its existing European broadcasting footprint, including through acquisitions.

In 2019, Groupe M6 acquired Lagardère’s TV business, to complement its offering for families and to strengthen its overall position in the French media market, both in TV advertising and digital. This transaction included the full acquisition of Gulli (the country’s leading freeto-air digital channel for children), five pay-TV channels and the corresponding streaming services, including Gulli Replay and Gulli Max.

Another focus for strengthening the Group’s core business in broadcasting is to increase non-advertising revenue, by further growing the revenue from platform operators. RTL Group aims to receive a fair revenue share for its brands and programmes from the major distribution platforms – cable network operators, satellite companies and internet TV providers – for services such as high-definition TV channels, streaming platforms and digital pay channels.

Every year, RTL Group invests € 3.5 billion in content, combining the programming spend of its broadcasters and the productions of its global content business, Fremantle.

Exploring all possible ways to develop and own new hit formats and continuing to grow the Group’s investments into premium content are key to strengthen RTL Group’s core businesses.

Every investment in local, exclusive content – including attractive rights for live sports events – strengthens both RTL Group’s linear TV channels and streaming services. In January 2020, for example, Mediengruppe RTL Deutschland won a tender for the full and exclusive rights to broadcast and stream the Uefa Europa League and the newly established Uefa Conference League, starting with the 2021 to 2022 season, for a period of three years. This deal strengthens two of Mediengruppe RTL Deutschland’s linear channels, RTL Television and Nitro, and will also be key for TV Now.

In 2019, RTL Group launched a new creative unit – Format Creation Group (FC Group) – which develops non-scripted formats exclusively for RTL broadcasters and their streaming services. FC Group is jointly financed by RTL Group’s major broadcasters. The new unit aims to fulfil the growing demand for exclusive content by developing innovative formats and intellectual property, fully owned and controlled by RTL Group. FC Group currently focuses on the development of entertainment formats, reality and game shows, working closely with RTL broadcasters to reflect their needs in the local markets in which they are active.

Portfolio management: management is continuously reviewing the Group’s portfolio of assets. In the last two years, RTL Group sold several non-core assets such as the football club Girondins de Bordeaux, the website MonAlbumPhoto in France, and the home entertainment and theatrical distribution company Universum Film in Germany. The Group has also started to review strategic options for BroadbandTV and SpotX.

Cost reduction: management is continuously assessing opportunities to reduce costs and to reallocate resources, for example to its streaming services. In 2019, RTL Group’s Executive Committee reviewed the role of the Group’s Corporate Centre (see page 41 “Management approach”). As a consequence, the Group’s Corporate Centre has been significantly reduced and partly been transferred to Cologne, Germany.

RTL Group is building national streaming champions in the European countries where it has leading families of TV channels. Making the most of the Group’s competitive advantage in local programming, these streaming services will complement global services such as Netflix, Amazon Prime and Disney+.

The strategy is rolled out either through stand-alone services such as TV Now in Germany and Videoland in the Netherlands, or through national partnerships such as Salto in France.

At the end of 2019, RTL Group registered 1.44 million paying subscribers for its streaming services TV Now in Germany and Videoland in the Netherlands – 37 per cent more than last year. The viewing times of TV Now and Videoland also increased over the year, by 31 per cent and 45 per cent respectively.

To further boost the expansion of RTL Group’s streaming services over the next five years, RTL Group will grow:

RTL Group’s content business, Fremantle, is one of the world’s largest creators, producers and distributors of scripted and unscripted content. Fremantle has an international network of production teams, companies and labels in over 30 countries, rolling out 400 programmes across 75 formats each year, producing over 12,800 hours of original programming and distributing over 20,000 hours of content worldwide.

Given current market trends, drama series are key for RTL Group’s expansion plans for both its streaming services and its global content business, Fremantle.

Since 2012, Fremantle has invested heavily in highend productions, to accelerate its growth in scripted series. With a series of acquisitions – including Miso in Scandinavia, Wildside in Italy, KwaÏ in France, Easy Tiger in Australia, and Abot Hameiri in Israel – Fremantle has created a global network that now comprises 19 production sites for drama series.

Fremantle also bought minority stakes in a number of newly founded production companies, to secure first access to their creative talent and output. Working with world-class storytellers is key to Fremantle’s scripted strategy. Currently, Fremantle – together with broadcasters and streaming platforms – is working on the realisation of at least 50 scripted series ideas.

As a result of this strategy, Fremantle currently generates 23 per cent of its total revenue from drama productions. While this share is expected to grow further over the coming years, management has decided not to give specific guidance on this indicator anymore. This reflects Fremantle’s strategy to grow its business across all genres, including non-scripted formats, and to react swiftly to the constantly changing audience tastes in the various markets.

INVESTING IN TECHNOLOGY AND DATA

RTL Group’s largest unit, Mediengruppe RTL Deutschland, is responsible for the Group’s ad-tech business Smartclip. The objective is to create an open ad-tech platform, based on the technology developed by Smartclip and tailored for the needs of European broadcasters and streaming services. Accordingly, Mediengruppe RTL Deutschland will invest further in evolving and growing the Smartclip platform.

In 2019, Mediengruppe RTL Deutschland and ProSiebenSat1 launched d-force, a joint demandside platform for addressable TV and online video in Germany and Austria.

RTL Group’s tech platform for its streaming services is currently built by Groupe M6 and its tech unit Bedrock. A common platform allows RTL Group to bundle its investments in streaming technology. The platform built by Bedrock will initially serve the French subscription service Salto – a partnership of Groupe TF1, France Télévisions and Groupe M6, due to be launched in 2020 – and Videoland in the Netherlands, as well as the RTL services in Belgium, Hungary and Croatia. Mediengruppe RTL Deutschland’s TV Now platform and Bedrock will increasingly share components. RTL Group has agreed to become a 50 per cent shareholder of Bedrock, which will be a European platform open to third parties.

Within the area of data, the open log-in standard NetID was developed by the European NetID Foundation and initiated by Mediengruppe RTL Deutschland, ProSiebenSat1 and United Internet. The standard offers a single sign-on which can be used on numerous German websites by 35 million users. The partner network of NetID already includes media companies such as Süddeutsche Zeitung, Spiegel Gruppe, Gruner + Jahr, retail companies such as Zalando, Otto Group, C&A, Conrad Elektronik, and Douglas, as well as the parcel delivery company, DPD.

In France, Groupe M6 is a founding member of the media data alliance, Gravity. The alliance currently includes 150 websites and applications from different companies and sectors such as telecommunications (for example Orange, SFR), media (for example Prisma Media, Condé Nast), e-commerce and services. Gravity aims to make all transactional, navigational and customer relationship management (CRM) data from the French publishing market available to agencies and advertisers through a common platform, to improve the performance of its clients’ campaigns.

RTL Group’s digital video businesses have built significant reach among the young audiences that are highly sought after by advertisers.

In July 2019, RTL Group’s Executive Committee approved a growth plan to significantly expand Divimove’s capabilities in talent management, production of short-form video content, advertising sales, and technology and data. In January 2020, Divimove acquired Tube One, one of the best-known influencer networks in Germany.

In competing with the global giants, new alliances and partnerships between European media companies have become increasingly important.

One key development for RTL Group’s largest revenue stream – advertising – has been the increased demand from advertisers and agencies for global adbuying opportunities. As a consequence, RTL Group is expanding its international sales house, RTL AdConnect, to give international advertisers and agencies easy access to RTL Group’s large portfolio of TV and streaming services, digital video networks and advertising technology, in a brand-safe environment. To be more relevant in all key European markets, RTL AdConnect’s portfolio also encompasses leading partners such as ITV in the UK, RAI in Italy and Medialaan in Belgium. Thanks to these partnerships, RTL Group is one of the only media companies in Europe that can offer advertisers pan-European digital video campaigns.

Ad Alliance, launched in Germany in 2017, offers high-reach to advertisers and agencies, and develops cross-media solutions and innovative advertising products as a one-stop provider. The Ad Alliance portfolio spans television, radio/audio, print, and digital. Ad Alliance is the only sales house in Germany that can offer complex campaigns across all media from a single source. In 2020, Media Impact became a partner of Ad Alliance for the digital inventory of Axel Springer and Funke Mediengruppe. Together, the platforms of the Ad Alliance reach 99 per cent of the German population. Ad Alliance remains open to additional partners.

RTL Nederland has followed the German example and is currently building an integrated advertising sales network for the Dutch market, also called Ad Alliance. The Dutch Ad Alliance integrates the sales activities of RTL Nederland, BrandDeli, Adfactor and Triade Media, and will also be open to new partners.